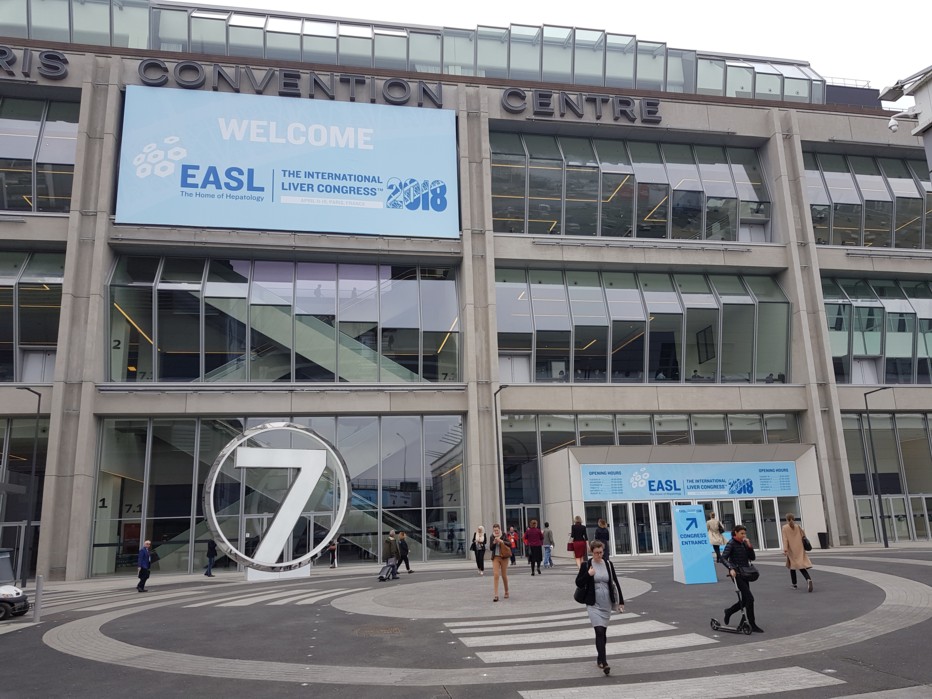 It seems that all my writing time at the moment is when I am travelling. Right now I am sitting at a London station waiting for the train to Paris. Its nearly 6 in the morning and I have been awake since about 4 a.m. simply because I could not trust the alarm I had set for five… I think I have an inherent distrust for digital technology even though my entire work life revolves around it.
Now I am on the Eurostar hurtling toward Paris, underground, underwater… toward the 2018 EASL Conference where the world’s liver doctors and drug companies meet to discuss recent breakthroughs in the various domains of liver health and science.
Outside the train window the swampy landscape of south east England is shrouded in mist. The fields of grass and reeds and shallow ponds remind me of the swamp in Lord of the Rings that Frodo and Sam had to cross on their way to Mordor.

EASL: The Liver and the money.

Whilst the name EASL stands for European Association for the Study of the Liver EASL is now considered the premier annual international event for liver medicine.
It is funded by Big Pharma to the tune of hundreds of thousands of dollars. Not only does Big Pharma sponsor the actual event but it pays for liver specialists and researchers from around the world to attend EASL. It pays for their airfares and their accommodation. It also pays keynote speakers huge fees, tens of thousands of dollars, to speak at EASL.
A number of high profile international liver experts earn very large incomes from Big Pharma by speaking at these events around the world. Obviously they promote Big Pharma products, though usually not overtly.
In 2016 and 2017 Dr James Freeman was able to present papers on the performance of generic DAA treatments on Hepatitis C however this year his papers were rejected. So I am not travelling to EASL to be part of a presentation but rather to interview some of the world’s liver doctors about why there is so much resistance to treating patients with generic Hepatitis C medicines, particularly in situations where the patient has no other options.
I also hope to talk to some of Big Pharma people to get their perspective on Hepatitis C medicine prices and how they develop their price policies. In particular I hope to speak to someone high up Gilead’s managerial pyramid.
I would like to look one of these guys in the eye and ask them how they justify with-holding medicine from millions of suffering people. I’m sure they will have some kind of well-rehearsed answer constructed by their public relations people… but it will be interesting.
You know I almost think it would be refreshing to hear one of these guys speak honestly and say something like;
“Well the answer is simple, we are only interested in maximising profits and really we don’t care about human suffering, we exist to make money and that’s the end of the story.”
A hard answer but at least it would be honest.

Plan A: Action and No Action

Actually I have to say here that interviewing Big Pharma executives is actually my fall back position, my Plan B.
Plan A had been to organise some form of action at the EASL Conference, a demonstration of some kind to attract media attention to the problems associated with people around the world being blocked from accessing treatment by the high cost of the medicines.
To this end I contacted every Hepatitis focused support group I could find in Paris to see if we could cooperate in organising some kind of action. The weird thing was that not one of them even bothered to reply to my emails. After trying to make contact for a couple of weeks and being totally ignored with not even one single reply I gave up and changed tack.
If I could not organise some kind of cooperation with a French Hepatitis advocacy group then I would try to get help from any group anywhere in Europe… I needed a little help from someone.
So I contacted a group based in Europe called Pharma Rebels that had run a great action at a Gilead sponsored Conference. My friend David Cowley had been involved in that My friend David Cowley had been involved in that action and had told me that there was a nice Pharma Rebels banner left over from that action which he was sure I would be able to borrow.
We tried for a week to track down the banner but no-one knew where it was. It had been left with one group that gave it to another group that claimed they gave it back to the first group.
That was a pity.
So I resolved I would forget about staging some kind of action, the omens seemed to be against it.
Rather I would just turn up and go with the flow.

Pharma Rebels is a fantastic advocacy group, one of the rare Hep C advocacy groups that has not been bought off, or infiltrated by, Big Pharma 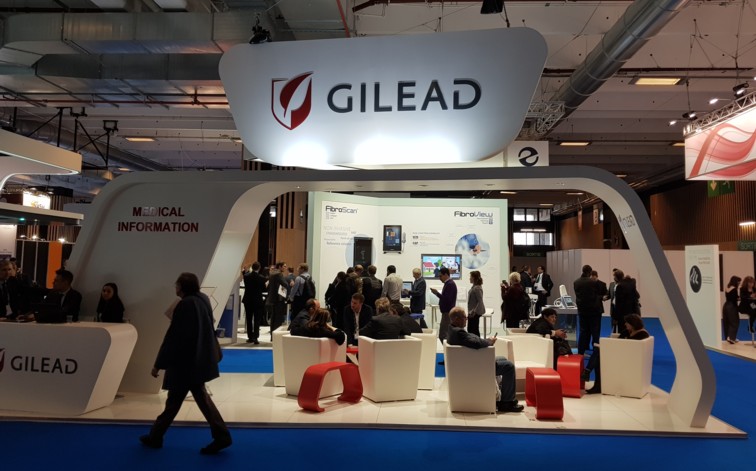 One of Gilead’s three stalls at EASL 2018. Gilead is one of the four major sponsors of this event and I would guess they have spent millions just on this week long talk festival.