Hepatitis C induced cirrhosis is one of the most damaging effects of having Hepatitis C and can lead to many serious health problems including liver failure and liver cancer.

In this post I will explain what cirrhosis is and explain the factors that determine the level of liver fibrosis.

Cirrhosis of the liver can be caused by many things, including other forms of Hepatitis and also drug and alcohol abuse.

Cirrhosis is the late stages of fibrosis. Fibrosis basically refers to scar tissue in the liver. This scar tissue is harder and stiffer than normal liver tissue.

Fibrosis used to be measured by surgically removing  a small section of liver and looking at that section under a microscope to arrive at the level of Fibrosis. This was called a liver biopsy but it is invasive, painful and potentially dangerous. Now-a-days a  machine called a Fibroscan is used. This is non-invasive and uses sound waves to measure liver stiffness. 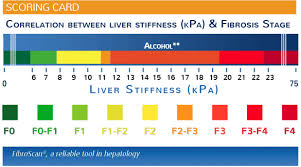 This diagram shows how a Fibroscan measures liver stiffness and how that reading relates to the “F ” score.

In the case of Hep C induced liver fibrosis the damage is caused by the Hepatitis C virus destroying liver cells, the dead cells become scar tissue. The scar tissue ceases to function as a liver tissue and so the liver’s functions are impaired. The more scar tissue in the liver, the higher the fibrosis level. Once the liver becomes cirrhotic liver failure become more and more likely.

The way that the Hepatitis C virus destroys liver cells is that the virus “breeds” inside the liver cells, using the generic material inside the cell to replicate itself. The virus’s presence inside your liver cell then causes your liver cell to “explode” sending new virus particles into your blood stream where they hook onto other liver cells, invade them and repeat the process. If you have Hep C this process is happening all day every day.

For some people this level of liver damage is low and the liver is able to heal and there is not much scar tissue formed. However, over time the scar tissue will increase. The scar tissue in the liver is like the scar tissue from a wound to a muscle, it is harder and less flexible, than the surrounding tissue. As the amount of scar tissue in the liver increases the liver becomes harder and less flexible. This is fibrosis. Fibrosis is rated from F0 to F4. At the bottom end F0 means no fibrosis (or so little as not to worry about it) and at the top end F4 means a person has cirrhosis.
If you have cirrhosis it means that your liver is pretty much a big mass of scar tissue. With cirrhosis comes increased chance of liver cancer or liver failure and death. (I was border line F3/F4 when I started treatment). 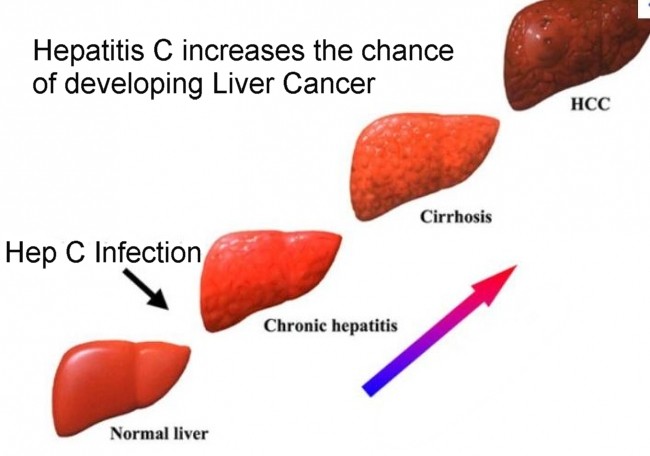 Until relatively recently the way that fibrosis level was determined was by a liver biopsy. This involved inserting a hollow needle into the liver and removing a “core” sample of the liver tissue. A biopsy is an invasive surgical procedure, that is often painful and can sometimes lead to serious complications.
Because any form of surgery is both costly and risky the Fibroscan was invented as a means of determining liver fibrosis without the need for surgery.

Knowing the fibrosis level, and whether a person has cirrhosis or not, is helpful for determining how long Hepatitis C should be treated. Simply speaking the higher the fibrosis level the longer the treatment time.

How Well the Liver Heals

The good news from all this is that once the Hepatitis C is cured the liver has an amazing ability to heal. It will remove all the scar tissue and it is quite common for people who were rated F3 or F4 to return to F1 or even F0. Even people who were on the waiting list for a liver transplant have seen their liver repair itself so well that they no longer required a liver transplant.