The price of Harvoni in the USA is more than $80,000 however licensed generic Harvoni can be supplied for less than $1,000 including delivery. Let Greg Jefferys help you cure your Hepatitis C now.

A Look at the Harvoni Price

Recently I was involved in detailed discussions with a manufacturer of generic Hepatitis C medication in Asia. As part of this discussion we talked about the need to make the price of Hepatitis C medication as cheap as possible so that everyone, from any country, could afford to treat their Hep C. This led to this manufacturer agreeing that they would try to produce and sell Sofosbuvir based treatments for the lowest possible price. Of course they would still make a fair profit on the drugs they made but they would make a price that gave them a profit and made the treatment affordable to everyone.

The issue of the Harvoni price is the most controversial component of what is otherwise a miraculous drug. If it was not for the outrageous price of Harvoni people would be hailing Harvoni as the wonder drug of the 21st century and praising Gilead, its creator. However because of Gilead’s policy of making the Harvoni price so high Harvoni is seen as one of the worst examples of price gouging in the history of the pharmaceutical industry and Gilead as one of the most greedy and ruthless pharmaceutical companies on Earth. Adding to the confusion about Harvoni’s price is the availability of generic versions of Harvoni from India, Bangladesh and Egypt, all of which have price tags around US,000 or less for a 12 weeks treatment. Given that the Indian licensed generic Harvoni is chemically identical to Gilead’s expensive brand Harvoni it shows that Harvoni can be manufactured and sold for a profit at a fraction of the price being charged to people in the USA who need Hep C treatment.

So how did Gilead arrive at the Harvoni price of more than US$80,000 for a 12 weeks treatment of 84 little pills and what is the actual cost of making Harvoni?

A Brief History of Harvoni

Harvoni is a combination of two drugs Ledipasvir 90 mg + Sofosbuvir 400 mg and was approved for medical use in the United States in 2014. Harvoni came on the back of the success of GILEAD’s first DAA called Sovaldi, which was a single pill of Sofosbuvir 400 mg. It was found that by combining Ledipasvir with Sofosbuvir a powerful drug was created that would treat Hepatitis C genotype 1. As a result of of Harvoni’s success it is now on the World Health Organization’s List of Essential Medicines, the most effective and safe medicines needed in a health system. Unfortunately Harvoni’s price puts this important Hepatitis C treatment out of reach of most people and even out of the reach of  most national health services and health insurance companies. 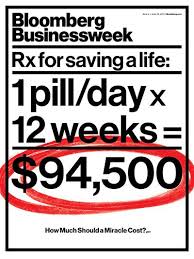 The price of a cure? But what if you have not got the money?

In 2014, the United States Senate Committee on Finance investigated Gilead’s high price of Sofosbuvir ($1,000 per pill; $84,000 for the full 12-week regimen). Senators questioned the extent to which the market was operating “efficiently and rationally”, and committee chairman Ron Wyden and ranking minority member Chuck Grassley wrote to CEO John C. Martin asking Gilead to justify the price of its Hepatitis C drugs. What Gilead replied I do not know but we do need to ask how did Gilead arrive at this price for its Hepatitis C drugs?

Arriving at the Harvoni Price.

Exactly how GILEAD arrived at the Harvoni price is clouded in secrecy however because of my contacts in the pharmaceutical industry I heard this story, which I believe is true.

When Gilead was certain that it had a cure for Hepatitis C it surveyed a number of USA based health insurance companies and asked how much it cost them if one of their customers caught Hepatitis C… from when they first contracted the disease until they died. It turned out that the cost was about US$200,000  per patient. So Gilead said something like ” so if we could cure 95% of your customers who have Hep C and charged about $80,000 per treatment that would be a price you would pay?”

So the story goes that Gilead worked out the cost of a person having Hep C to a health insurance company and then figured out what the maximum price they would be able to charge for Harvoni would be. The same logic applies to national health services in countries that offer health cover for their citizens.

The Difference Between a Fair Profit and an Obscene Profit: What Harvoni costs to make.

So as these talks I was having with this Asian pharmaceutical manufacturer progressed we came to the point where the final wholesale prices and the actual manufacturing costs were discussed. To my amazement the cost of manufacturing a 12 week treatment of generic Harvoni, including all the packaging, the bottle, the box etc was less than US. That is approximately US$20 per bottle!

Now this is the cost for a manufacturer doing a run of 6,000 bottles, that is to say 2000 treatment. This manufacturer is in the process of getting moving to production phase and it is hopeful that by the end of this year, or earlier, we will see Hepatitis C treatment available for around US0 for 12 weeks treatment.

So What Does Harvoni and Epclusa Cost Gilead to Manufacture?

The manufacturer  I have been talking to is a relatively small scale operation compared to the number of treatment that Gilead does in  a “run”. So based on the economies of scale I would guess that Gilead’s cost per 12 week treatment is less than $50 per treatment.

Not true! Gilead has the active ingredients of Harvoni and Epclusa manufactured in the Middle East country of Jordon.  So the active ingredients for Gilead’s Hepatitis C drugs are made in a middle east country then they are shipped to Ireland where the active pharmaceutical ingredients (APIs) are mixed with inert powders and  turned into pills. After being turned into pills the packaging also happens in Ireland because Ireland is a low taxation zone which allows Gilead to avoid paying taxes in the USA.

So have a little think about this situation. Gilead has a stable of drugs, Sovaldi, Harvoni and Epclusa which could save the lives of nearly one million people each year, not to mention the suffering of the more than 100 million people infected with Hepatitis C. This treatment costs less than $50 to make. Gilead avoids US taxes by having its packaging done in Ireland and its pharmaceuticals manufactured in Jordon.

Gilead’s retail price for a 12 weeks of Harvoni or Epclusa is around ,000, whilst their cost is less than . So they are multiplying the cost of manufacture of Harvoni and Epclusa by around two thousand times to arrive at the retail price. I would be so bold as to suggest that in entire history of the human race there has never been a product sold with such a massive profit. Such an obscene profit.

If you want to purchase licensed generic Harvoni I can organize everything for you.

The process is simple and delivery guaranteed.

The maximum price for a 12 weeks treatment of generic Harvoni is US0. Email me now for details using the contact form at the bottom of this page. 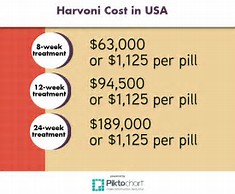