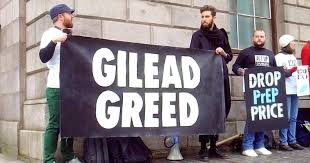 For four years in a row Gilead has been the winner of Big Pharma’s annual “Golden Greed Award” as well as already being the winner of the “Most Profitable Medication In the History of Humanity Award”.

Over the past five years Gilead has been averaging over US$12 billion of profit per annum from its Sofosbuvir based drugs. That’s profits after costs on Sovaldi, Harvoni and Epclusa.

Not content with making these mind-blowing profits Gilead has a cunning plan to continue to reap these vast profits for years to come by using and abusing patent laws to block access to cheaper generic Hepatitis C treatments in both developed and developing countries; regardless of the cost in human suffering and loss of life.

Gilead uses a fraction of its vast profits to buy the loyalty of doctors, medical academics and government health officials. (Some might call this bribery and corruption… others might call it buying influence.)

Simultaneously Gilead uses its vast power to crush its competitors in the courts.

Green Fielding: What Gilead and Monsanto have in common.

In the patent world this process is called Green Fielding. Monsanto used it to extend its patents on the infamous herbicide called Roundup.

Basically if the patent can not be granted (or has expired) the company applies for a patent on some part of the manufacturing process or some other obscure aspect of the product.

Such manipulation of the patent laws is only possible for huge multinational companies with vast resources and armies of lawyers and patent attorneys.

Another example of the power of Big Pharma is found in India’s challenge to the patent on Sofosbuvir.

Initially India refused to grant a patent on Sofosbuvir because it did not demonstrate qualities of innovation that would justify a patent. This refusal to grant a patent resulted in the birth of the Indian generic Hepatitis C industry, which has saved hundreds of thousands of lives around the world.

However corrupt officials in the Indian government overturned the ruling and Gilead was granted a patent on Sofosbuvir and thereby given direct control over the generics manufacturing Industry in India, enabling Gilead to place barriers and obstructions as to who and how Indian generic Hepatitis C medication could be sold.

Here is what Gaelle Krikorian, the head of Policy in the MSF Access Campaign had to say about the European Court’s decision to grant Gilead’s patent o Sofosbuvir.

“Today’s decision is a clear illustration of how multinational pharmaceutical corporations like Gilead abuse the patent system so they can shut out any competition and continue unfettered to charge exorbitant prices. We will appeal today’s decision as we strongly believe that the European Patent Office should have revoked the patent.”

“Any patent granted in Europe not only affects access to medicines for Europeans, but also impacts people in many developing countries that lack the resources to perform careful patent examination, and instead follow the European Patents Office’s decisions. This calls for extremely close scrutiny by EPO of any patent related to medicines.”

So once more Gilead has succeeded in creating barriers to try to stop people with Hepatitis C accessing affordable medication.

How many more hundreds of thousands of people must grow sick, suffer and die to feed Gilead’s insatiable hunger for profits? 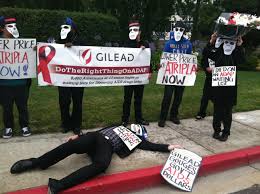