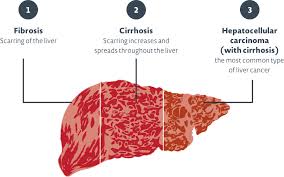 Nowadays most of my blog posts are inspired by emails I get from folk about their Hepatitis C experiences; having Hep C and the process of getting rid of it…because I have been cured for more than two years now my Hep C experiences are all about helping others access treatment and helping them through the process of the cure. One of the biggest issues with Hepatitis C is the development of liver fibrosis/cirrhosis and ultimately liver cancer.
One of the things that keep coming up is how well the liver can heal itself once the virus is removed from the equation.
One of the big problems from having Hepatitis C is our liver getting scarred by the Hep C virus. This scar tissue leads to fibrosis of the liver and eventually to cirrhosis. Fibrosis, the scar tissue, is also where liver cancer, HCC, begins.
So having any level of fibrosis leads to an increased risk of HCC, the more scar tissue in your liver the higher the level of cirrhosis.
Increased fibrosis levels also affect the liver’s functioning. The more scar tissue the less functioning liver tissue is available. So not only does fibrosis increase the chance of liver cancer it also impairs the liver’s functions.

Out of Date Cirrhosis Information

Many doctors will tell Hepatitis c patients that the liver cannot recover from liver cirrhosis. This is not true. Fibrosis is rated by a score that begins at F0 (no fibrosis) and rises to F4 (cirrhosis). In the past liver Cirrhosis has long been regarded as the “end” … the point of no return.  People believed that liver functions were ruined and the chance of developing liver cancer was high.

There is now a huge body of evidence that proves that the liver will heal from cirrhosis once Hepatitis C is removed.
So the perception that liver cirrhosis is final and irreversible is changing. The very good news is that once the Hep C virus is removed many people are reporting that the liver is healing better than was expected. People with cirrhosis (F4) are finding that their liver fibrosis levels return to F2 or F1. The chance of liver cancer reduces by more than 70% and the liver functions return to normal.

The important thing to remember is that Hep C induced liver damage will heal after Hepatitis C is treated. The critical factors in seeing the liver regenerate after Hep C is a healthy lifestyle and a good diet.

Recent research has shown that the liver will repair itself after cirrhosis except in a few cases. This research shows that being significantly overweight was the main risk factor for the persistence of advanced cirrhosis after Hepatitis C treatment.

So if you want to maximize your chances of complete recovery once your Hep C treatment is done you MUST ensure that you have a healthy lifestyle… that is to say a good diet and plenty of exercise.

The two emails below are ones that I received just yesterday that confirm from real life experiences how well the liver heals once the Hep C virus is successfully treated. 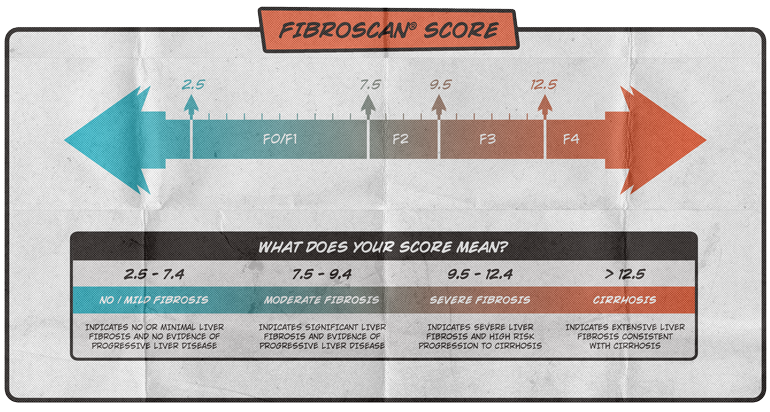 Understanding the Fibroscan score: F0 is no Fibrosis and F4 means that the liver has Cirrhosis

This email from a Hep C patient in the UK.

I hope you are well.

11 months after the end of the treatment I am still undetected which is great.

Of further note, my fibro scan reading has dropped from the original reading of 20.9 kPa  to 14.3 skPa o despite being told it may not drop mine has dropped significantly.

This email from a patient in New Zealand, the well-known and respected Hep C activist Hazel Heal.

Hi Greg
Here is my Hep C fibrosis story.
The background story is that I was infected with Hep C in the 1980’s after the birth of my first child, from a blood transfusion.
I found out that I was infected and had a biopsy soon after – early 1993, I had genotype 3 and the early stages of fibrosis.
In 1997, had another biopsy and cirrhosis was diagnosed. Liver Function Test showed that my enzymes were all high.
1998, with one other person, was first in Dunedin to have alpha Interferon and Ribavirin for12 months, was sick every 2nd day. The treatment really did a lot of damage to my thyroid but my liver function normalised.
Unfortunately, the treatment did not clear the virus. As we now all know genotype 3 is the hard one!
These in 2003, with my LFTs rising again, I did 6 months of treatment with peg./riba.
At the end of the treatment, I had my gall bladder out and another biopsy. The liver cirrhosis was now a bit worse.
Unfortunately, the virus came back, I felt it come back! It was one afternoon about a month after end of treatment. But again, my liver function normalised after treatment and this lasted about 8 years.
Then in 2014, the liver function test showed that my liver enzymes were starting to rise again. My fibroscan showed liver stiffness increasing so I got moved from 12 months to 6 monthly fibroscans.
The fibroscan in Sept 2015 was 40kPa up from about 18 previously and I knew that I needed to treat, urgently, like yesterday!!!
My doctor told me that the next step was to get on the liver transplant list, but until I had been on it, and further deteriorated, I couldn’t get treatment.
I had been infected with Hepatitis C for 18 years, I had fibrosis F4, decompensating but still not sick enough to get treatment!
To cut a long story short I eventually got the right advice from you, James and Giten early in October 2015. A few weeks later I was on treatment using 24 weeks of generic Sofosbuvir + Daclatasvir .
It took me 18 weeks of treatment to reach the “Undetected” stage. The viral load was low but it took 18 weeks to reach Undetected!
Now the big news… at the end of treatment I had another fibroscan and was told I was down from 40kPa to 22kPa which was a big improvement.
Six months later I was down to 9.5 kPa and that was the biggest surprise, since then 8.5 and now 7.5. As I say, they had to look hard to find any fibrous patches but there are still a couple.
I hope this helps folk understand just how much the liver can heal once the virus is removed.
Thanks again
H#####

So this shows that once the Hepatitis C virus is removed the liver will begin to heal and remove scar tissue and regain functions. This removal of scar tissue and reversal of cirrhosis has profound implications for people with Hepatitis C regaining normal health and significantly reducing the risk of developing liver cancer.
The important thing is to get rid of the virus and to do that ASAP.