One of the first people I helped with treating Hep C G3 was an English guy living on the Spanish Island of Majorca. He caught Hep C from surgery after a motorcycle accident in India, so he found it ironic that both his disease and the medication for its cure came from India.
In those days the optimum treatment for Hepatitis Genotype 3 was 24 weeks of Sofosbuvir + Ribavirin.  This was before generic Daclatasvir became available in India.
A few months prior to when he contacted me he had been ripped off by a couple of Russians who promised to supply him with the Sofosbuvir + Ribavirin for 10,000 Euros. He handed over the money and never saw those two men, or the money, again.
So he was a little reluctant to send money to me, a person he had never met, living thousands of miles away. But we did manage to work that out and I sent him his genotype 3 treatment from India.

It was great news to hear from him after 24 weeks that he was cured. The 24 weeks of Ribavirin included in his treatment made the treatment very difficult because Ribavirin can cause unpleasant side effects, but at the end he was cured and he was happy.

Not long after this happened generic Daclatasvir became available from India and the Sofosbuvir 400 mg + Daclatasvir 60 mg combination was hailed as the new wonder cure for Hepatitis C genotype 3, without the side effects of Ribavirin. Then India released generic Epclusa (Sofosbuvir 400 mg + Velpatasvir 100 mg), but I will come back to Epclusa latter. 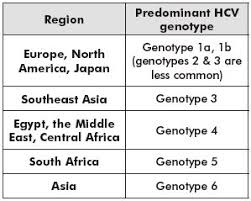 Hepatitis C genotype 3 is very common in South East Asia and also in some East European countries such as Serbia.

The Global distribution of Hepatitis C genotype 3 is interesting. In most western countries such as the USA and Europe Hep C Genotype 3 makes up about 25% of all Hep C infections but in South East Asia G3 is the predominant genotype of Hepatitis C and causes huge problems amongst a population that can ill afford the cost of treatment, even generic treatment.

Of course, the problem was that in Western countries a 12 weeks of Sofosbuvir cost US$84,000 and 12 weeks of Daclatasvir cost US$54,000, making a 12 week treatment with Sofosbuvir + Daclatasvir cost around US$140,000: so the treatment was out of reach for all but the wealthiest patients. Even wealthy countries could not afford to have the price on the national health services. 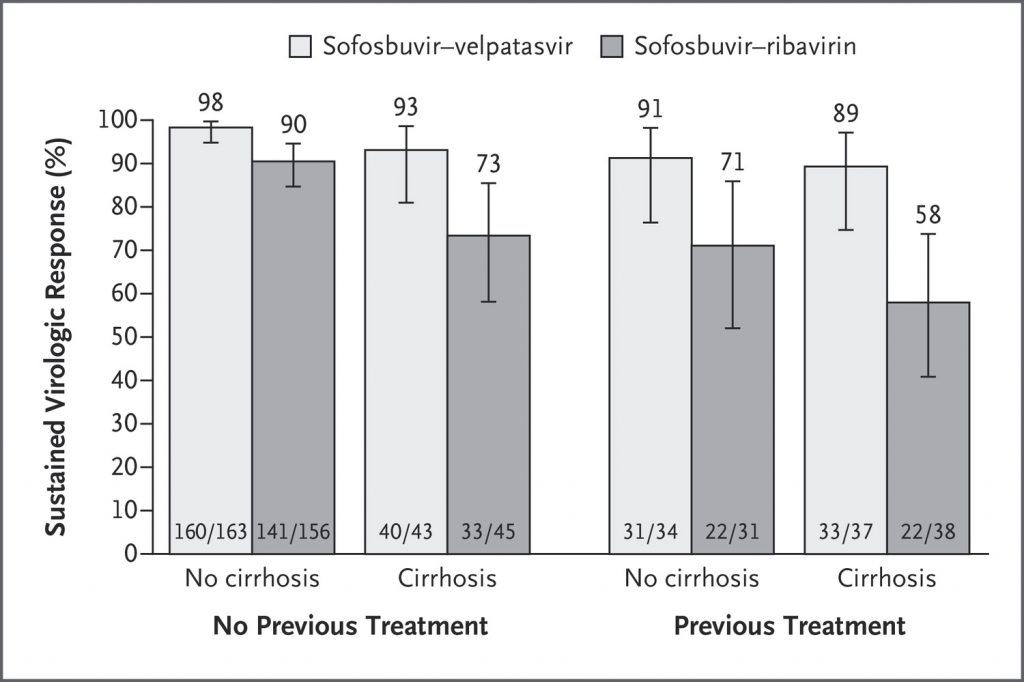 Initial trials showed that treating Hepatitis C G3 with Epclusa was better than Sofosbuvir + Ribavirin. Particularly if the patient had cirrhosis.

Then along came Epclusa, which is Sofosbuvir 400 mg + Velpatasvir 100 mg.
Early trial results indicated that Epclusa was more effective against Hepatitis C G3 than Sofosbuvir + Daclatasvir or Sofosbuvir + Ribavirin but only very slightly, just 1% or 2%, which some statisticians would say was statistically insignificant.

The claim was that 12 weeks treatment of Epclusa was an effective treatment for Hep C genotype 3.

However I had heard this before and noticed that trials and “real world” treatments often give very different results.

In the real world, 12 weeks treatment with Epclusa gave about a 95% cure if the patient had not failed previous treatment. 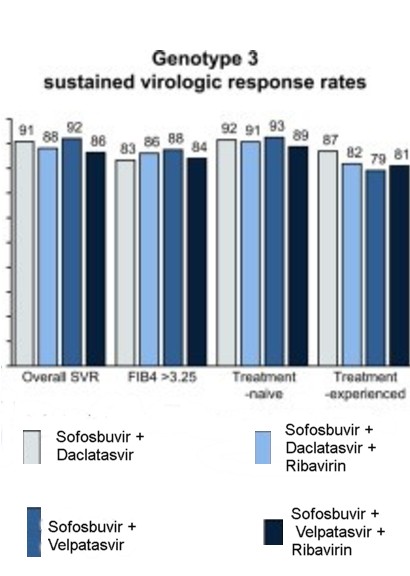 Mavyret was a late-comer for the treatment of Hepatitis C manufactured by the global pharmaceutical giant AbbVee.

Mavyret aimed to take a share of GILEAD’s dominance of the Hep C treatment market by coming in at a price point of about half of the price of GILEAD’s Hep C drugs. Because of its low price point Mavyret quickly grabbed a huge share of the market, particularly in the USA. However, Mavyret is less effective across all genotype of Hep C when compared to the Sofosbuvir based Hep C treatments.

Mavyret gives cures of 95% or less for genotype 3 compared to GILEAD’s Sofosbuvir based treatment. In the ENDURANCE TRIALS, run by Mavyret’s maker, AbbVee, Sofosbuvir + Daclatasvir was shown to be more effective than Mavyret against genotype 3. 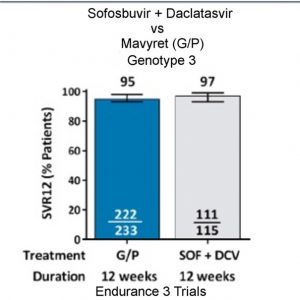 Mavyret is a pan-genotype Hep C treatment. That is to say, Mavyret cures all genotypes of Hepatitis C but at a slightly lower rate than the Sofosbuvir based Hep C treatments.

The length of treatment time is very important. Because Genotype 3 is the hardest to treat and even harder to re-treat after a relapse it is important that the first treatment clears the virus completely.

We know that treatment with Sofosbuvir + Velpatasvir (Epclusa) success rates look something like this:

For governments and insurance companies, they usually will say, because of the high costs,  ” 94% cure rate is good enough”  even when longer treatment provides better results.

As you will see from the email below, it is another example of why a person with Hep C Genotype 3 should do more than 12 weeks. I receive emails like this quite regularly.

I hope you are doing great. Just went through your blog and found very helpful.

Though liver still not too bad, I am weighing retreatment options. Can you please share your opinion on below?

Do I need NS5A resistance test?

Since Vosevi is still not in access in my area, would you go for Epclusa+Riba again for 24 weeks this time?

Thanks and Best Regards,

Footnote:
Caffeine and Taurine and Hepatitis C treatment.
There is an enzyme in the body that breaks down most DAAs used in treating Hep C. If you have high levels of this enzyme in your blood you may effectively under dose on your Hep C medication.
There are two things that I know of which will cause high levels of this enzyme in your blood Taurine, a stimulant found in energy drinks such as Red Bull or V and also caffeine. So no energy drinks whilst doing Sof+ Dac and keep daily caffeine consumption low, a couple of cups of coffee or tea a day is fine. For more information of Hep C treatment and caffeine please click here.