There are many different liver tests involved in getting clear information about the status of your Hepatitis C infection and the general health of your liver. I am writing this post is to try to give you some simple and easy to understand information about Hep C tests and what they mean. Over the past couple of years I have exchanged emails with many hundreds of people asking me to explain what their HCV test results mean. Usually this is because their doctor or specialist has not bothered to take the time to give this explanation or has explained things in such technical terms that the patient has not understood what was being said and what the HCV test results mean in real terms.

There are two types of tests associated with the Hepatitis C virus (HCV). Firstly there are blood tests that look for the genetic material (RNA) of the Hepatitis C virus OR for the antibodies the body’s immune system makes to try to remove HCV. The other type of Hep C tests are the tests that look at the health of the liver. These are the Liver Function Test and the Fibroscan, or Liver fibrosis test.

The first test done is the HCV antibody test. This test is done when a doctor suspects a patient has Hepatitis C; it is a cheap, fast and simple test. This test looks for the antibodies that your immune system makes to try to kill the Hep C virus. If this test shows that you do have Hepatitis C antibodies present in your blood it means that at some time you have had a hepatitis C infection; it does not mean that you are definitely infected with Hepatitis C.

The facts are that over 20% of people (more than 1 in 5) who are infected by the Hepatitis C virus will clear the virus with their own immune system. If you are a woman then the self-healing rate is actually closer to 30% and if you are a man it will be less than 20%. But everyone who has come in contact with the Hep C virus will always carry the Hep C antibodies… even after you are cured of HCV the antibodies will always be in your system. This is not a problem.

So if you have been treated for Hep C and were cured you will always carry the Hep C antibodies, as with people who have ‘self-cleared’. Those antibodies will stay in the blood forever. These antibodies have been made by your own body and have nothing to do with whether or not the virus is still present.

It has been very disturbing for me to realize how many doctors do not know this simple fact and I have answered emails from many people whose were very distressed because their doctor has told them that they have Hep C based solely on the results of the antibody test. Also many people think that they have relapsed because their doctor has ordered an antibody test rather than a viral load test. The result will always come back positive for Hep C antibodies!

Whilst the HCV antibody test is cheap and fast the viral load and genotype tests cost a lot of money and take at least one week to get the results back.

Below is a diagram which shows the normal sequence for Hepatitis C testing: 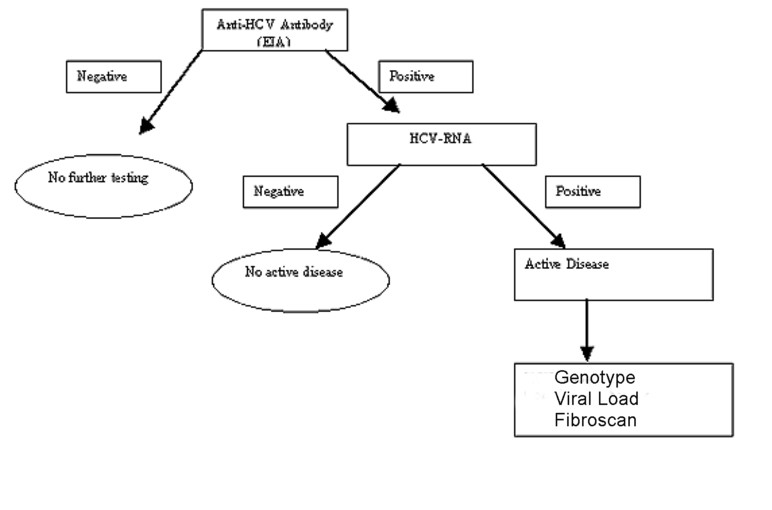 The quantitative HCV RNA test measures the amount, or number, of hepatitis C virus in the blood. The result will be an exact number, such as “1,378,980 IU/L.” Many people refer to the quantitative measurement as the Hepatitis C “viral load”… the load of virus a patient is carrying. The higher the number the more virus in the blood and in the liver. Numbers can range from 200,000 to 10 million or more. Ranges between 1 million and 5 million are common.

If a quantitative HCV RNA test result is reported in a form such as “<15 IU/L,” (under 15) this means that the quantitative test used cannot measure the hepatitis C virus below that number. It may mean that there is no HCV virus in the patient at all, but it may also mean that the level of virus is just too low for the test to pick it up. Generally speaking if a person has had Hep C and completed treatment and a viral load test shows no detectable virus 12 weeks after the End Of Treatment (EOT) then the patient is considered cured. Some doctors like to perform a second test 24 weeks after EOT but for many the cost of viral load test is a lot of money. In most countries the cost of a viral load test is between US$90 and US$200. So whilst ideally a qualitative test should then be performed to see if there is any detectable hepatitis C virus at all in cases where the cost of the HCV testing is expensive the viral load test at EOT 12 or EOT 24 may be considered enough.

The Qualitative HCV RNA test uses either a process called PCR or a process called TMA. Either type of qualitative test will report whether the hepatitis C virus is present in the bloodstream or not. The result is reported as either “detected” or “not detected.”

If a qualitative RNA test is positive (detected), then it is certain that the patient has Hepatitis C DNA in their blood. The “qualitative” test is more accurate than the “quantitative” test because qualitative tests are able to detect very low levels of the virus.

Because RNA, or genetic testing, for the Hep C virus can be expensive at up to US$200 per test, for many people this amount of money would be impossible to afford so if money is an issue a Liver Function Test is an good option to consider. A liver function test is cheaper at around $50 and gives a very good indication of the health of your liver.

The Liver Function Test is a test that looks at various enzymes that the liver produces. If the liver is being damaged by the Hepatitis C virus there are certain ‘marker’ enzymes that indicate liver damage. The main ones are called ALT, AST, ALP and GGT.

Because the Hepatitis C virus actually causes the liver to “leak” enzymes because of the damage it causes the level of liver enzymes is a very good indicator of the health status of your liver.

If these enzymes are significantly above normal levels AND you have Hep C antibodies then there is a very high chance that you have Hepatitis C and further testing for viral load and genotype, or just starting treatment, could be considered.

If money is a problem some people do decide simply to go ahead and start treatment with a generic Hepatitis C medicine that is effective against all genotypes of Hep C, such as Epclusa (Sofosbuvir 400 mg + Velpatasvir 100mg) or Sofosbuvir 400 mg + Daclatasvir 60 mg. Both these Hep C treatment options will treat all genotypes of Hepatitis C and cost less than US,000 so if money is tight then it makes good sense to avoid spending between US0 and US0 on further testing if you can clear the virus for only ,000 or less.

However if it is possible then doing the genotype test is ideal.

The Fibroscan: Fibrosis and Cirrhosis

The last issues associated with Hep C testing and liver damage is the level of fibrosis, that is to say, how much scar tissue the liver has as a result of the damage from HCV.

The use of non-invasive tests to stage the severity of liver disease (ie. scarring) is now well established in the management of patients with chronic liver disease. Fibroscan is the most popular non-invasive device used to assess liver ‘hardness’ (or stiffness) and provides a reliable method of detecting cirrhosis and excluding significant fibrosis.

The Fibroscan is a non-invasive device that assesses the ‘hardness’ (or stiffness) of the liver via the technique of transient elastography. Liver hardness is evaluated by measuring the velocity of a vibration wave generated on the skin. The vibration’s velocity is determined by measuring the time the vibration wave takes to travel to a particular depth inside the liver. Because fibrous tissue is harder than normal liver, the degree of liver fibrosis can be determined. To improve test reliability a minimum of 10 valid readings are required. Generally the entire test procedure takes about 15 minutes.

So there are five test options for Hep C.

The Liver Function Test (LFT) does not test for Hep C but in combination with the Antibody Test is a good indicator of chronic or acute Hepatitis C.

As with all testing the RNA based tests are not infallible and it does appear that very small amounts of “dead” Hepatitis C genetic material can survive in the patient’s blood for some time after the virus has actually been cleared.

I call this effect a ‘shadow’ and I don’t know what it means other than a lot of people have had this experience and thought that they had relapsed only to find that they had not relapsed. It is an area that needs more research.

Please note that I am not a medical doctor and the advice I am giving is based on my own personal observation and communications with people who have Hepatitis C.