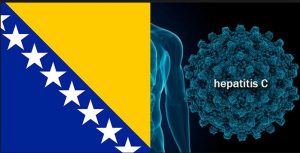 Since 2015 I have been helping people in many countries to access affordable Hepatitis C treatment. In some of those countries getting the appropriate Hep C medicine to the person who needs it is quite easy, the government has sensible importation rules.

In other countries it is quite difficult to get Hepatitis C treatment to the people who need it. These are countries where the government has draconian, authoritarian rules that do not serve their citizens.

Bosnia and Serbia are two such countries.

In the case of Bosnia there are very high rates of Hepatitis C infection. So to get Hep C treatment to the people in Bosnia   I have had to construct complex shipment methods. Often these people are desperate because they are caught between poverty and an uncaring, often corrupt, government.

Below is the story of one such person living in Bosnia who contracted Hepatitis C during the Balkans War in the mid-1990’s.

In November 2018, an awful pain in the stomach area woke me up. So terrifying and intense was this pain that for the first time in my life I was really scared for my health and my life. The pain did not stop. Not tomorrow nor next couple of days. I could not go to work. Pain also occurred during the daytime. It was so intense that it literally paralyzed me. Pills for pain were not helpful.

Hepatitis C and the Balkan War

I believe that I caught Hepatitis C in the 1992-1995 Balkans war. At that time, I did not think much about health. The future was not there, and like many others I turned to drugs to help me cope with the horror of this war. I guess that the drugs were a cure for mental health at that time. During all that, I picked up Hepatitis C virus somewhere.

The war ended, for me, with a psychic destruction. Caused by the war and the drugs.

When I realized that I had an unexpected health problem, it was already in 1997. Then I did blood tests and found out that I had picked up Hepatitis C virus somewhere. I was not worried, my drug addiction was the biggest problem.

I have tried treatment with addiction at a clinic in Zagreb, Croatia. Initially successful, but after a while I slipped back into old habits.

Then I went to the drug rehabilitation commune, to Medjugorje. I still did not worry about Hepatitis C. In the commune, especially, almost all of us had Hepatitis C.

Some guys, who had been in the commune for several years, were provided by the commune with interferon therapy. That was the first time I saw how severe this therapy was and how difficult it was for a human organism to handle it.

I spent a year there. I solved the problem of addiction.

There was a future!

The thought of Hepatitis C became difficult for me, rarely abandoned me. However, I could not, would not, commit to interferon therapy. Also, what prevented me was that I always had to work, I could not afford this luxury to be unemployed for almost a year for the duration of that therapy. I would remember the guys in the commune, the weight of the therapy, and their inability to do any hard work.

That’s how it’s been for years. The thought of the disease was there, and I would always reject it. I had no health problems, I was comforted, I lied to myself that it was not a big problem at all. However, in moments of honesty with myself, I admitted that I had a problem that , before or after, I would have to deal with.

The thought ripened. I had a daughter. I thought, I owe it to her to do something about my health. If something happens to me, what will happen to her? I was divorced, my daughter was with me. I did not have much confidence in my ex-wife in the care of our child. In addition, she was not in Bosnia at the time. She did not show any readiness for her daughter, to visit.

Recognising the Problem but not being able to act

In 2014 I decided to deal with the problem. New, more effective drugs for Hepatitis C have already been mentioned. I went to the doctor a specialist doctor for this kind of problem. We talked, he had experiences. He told me what tests I should do.

Tests are expensive for us here in Bosnia. There are free testing options but they are quite complicated if you do not live in the capital. They are complicated because of the arrangement of a state that is divided into cantons. You need approvals for everything from various commissions.

And again, the luxury I could not afford, you need a lot of free time for all that.

In the end my doctor started talking about interferon. When I mentioned the new medication, he only told me that we did not have it in Bosnia. He told me we’re late for the rest of the world in everything, so we’re late in that too. And he told me that it would probably take years for those drugs to be approved in Bosnia. He was right, five years later, the situation is still the same.

He could only offer me an interferon therapy. I gave up.

In the meantime, a friend, with problems similar to mine, sent me a link to the Hepatitis C Treatment Cure and Community Facebook group. I got involved, I watched, not really active. Everything reminded me of my problem, it made me feel uncomfortable, I did not quite like thinking about it.

It’s a difficult thought. It’s not something you’re talking about. This is something that stigmatises you. People do not get informed, if something is mentioned in society, they all comment like it is the plague, as if the virus was transmitted by air. I used to think it was only the problem of a small, conservative society, like the one I live in, in Bosnia.

Now I know that this problem is everywhere in the world.

So, a couple of years passed. I did nothing, I decided to wait for some happier times. To wait for new medications, to wait for my country to become part of the world.

A World of Pain

I started looking for specific information, following the Hepatitis C Treatment Cure and Community group intensively. Ultrasound did not show any significant damage to the liver, such as cirrhosis, so I decided to go into the whole story without a biopsy or Fibroscan. The Fibroscan is far away for hundreds of kilometers and hundreds of procedures, I was scared of myself giving up.

The decision was made, I’m going without it. What I’ve postponed for years I decided to launch in a couple of days of fear.

( Of course, then I still did not know how easy it was to actually get the Hepatitis C medication when you made contact with the right people.)

Getting Hepatitis C Treatment in Bosnia

The first question was how to get medication. A friend doctor told me that in my town already was one person who has resolved Hepatitis C virus problem with new medications. And she told me that this person wants to stay anonymous. I respected that. From that person, I received a couple of sentences, tips, experiences.

And I followed the FB group. Always, in all posts, comments, one name stretched across them. The name, Greg.

I was looking for Greg on the Internet. Seeking information. Read Greg’s story. Read stories, the experiences of other people with Greg.

I’ve seen, no matter how much that sounds absurd in today’s world, this man, Greg, did not want to become rich, he really wanted to help people. So, if ten persons are lying, not hundreds of them are lying. Well, it is not like he is paying the robots to praise him on the Internet.

I decided to contact Greg Jefferys. At that moment, all this story becomes simple, concrete, human. And again, a man gets more hit by goodness, sincerity, willingness to help without interest, than deceit and lie. You always expect cheating and lying, life teaches you so.

Goodness and sincerity belong to some other worlds. That’s why Greg Jefferys is not from this world.

I e-mailed Greg. Greg responds immediately to e-mails. Greg knows there is no time to wait. Greg knows one should not wait. Greg has experience. Greg answers the questions. Greg simply decided to help people. And that’s it.

Without doubting any more, I listened to all of Greg’s advice. He sent me medication. In a few days they arrived in Croatia, from where my friends brought them to Bosnia.

Then I did the blood test. The test said Hepatitis C virus was not provable in my blood. Not detected. After almost 25 years of destruction of my health and organism NOT DETECTED. It looked I got rid of the beast.

I told a friend, who has been following this story from the beginning, who brought me medicines from Croatia, he could not believe it. He could not say a word. My heart wanted to pop out of my chest.

I told my daughter, she cried.

I told my second wife, she wanted immediately to have a baby, life is ahead of us.

Thank you, Greg. Words are not enough to describe my gratitude. They are just a hint of everything I feel.

For me, and I have been through so many bad things, so many times wanted to quit, you have restored faith to people.

With your merit, I plan the future. Thank you.

I hope the story ends here.

I’ll repeat the test in a month and a half. So, it will be three months after the end of the treatment. The chance that the virus returned is small.

It does not matter. I know there’s a cure, I know there are good people. I know it’s possible to beat the beast and not give up.