Back in September 2017 there was a lot of media attention given to Hepatitis C Treatment In Malaysia because the Malaysian government had decided to allow the direct importation of generic Hepatitis C medication. The Malaysian government had decided to use a part of its sovereign patent laws to bypass Gilead’s patent on Sofosbuvir because of the public need.
Malaysia has a population of over 30 million people and over 500,000 of its citizens are infected with Hepatitis C. In other words about one out of every fifty Malaysians has Hepatitis C. Genotype 3 is the most common genotype of Hep C in Malaysia. Gilead had not included Malaysia in its “Access Program”  which permits licensed Indian manufacturers of generic versions of Gilead’s Hep C medications to sell in certain countries. This meant that Malaysians with Hepatitis C had to pay around US,000 for Epclusa. So it is easy to see why some urgent action was needed in Malaysia to fight the spread of Hep C there.
The plan was that generic Sofosbuvir would be imported by a Malaysian pharmaceutical company named Pharmaniaga Logistics using Egyptian generics made by Pharco Pharmaceuticals. The Egyptian Sofosbuvir would be combined with another DAA to create a Hepatitis C treatment regimen that would cost about US0 in Malaysia. THe idea that was floated was that this treatment would be available by the end of 2017 or the beginning of 2018.

You might wonder why the Malaysian government was forced to by-pass the Gilead licensed generic manufacturers in India because Indian Sofosbuvir is cheap and close by. The reason is that Gilead’s licensing agreement prohibited the Indian Sofosbuvir manufacturers from selling Indian generics in Malaysia. So even though India and Malaysia are immediate neighbors the generic Sofosbuvir had to be imported from Egypt because the Egyptian generics are not licensed. 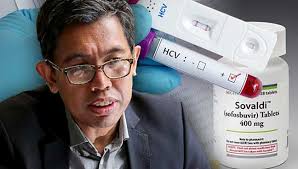 The problem in Malaysia and other Asian countries is that as soon as people see that there is BIG money to be made selling Hep C medication greed and corruption creep into the equation. Add to that the powerful influence of Big Pharma and its ability to work behind the scenes to protect its profits and you have a recipe for delays and more delays.

Big Pharma does not like to lose big, profitable markets like Malaysia to generics and you can be sure that Big Pharma is right now using every trick in the book to block or slow or reverse the September decision to allow generics into Malaysia. This is why in the first week of 2018 there has still been no progress and people in Malaysia with Hepatitis C are still waiting and wondering when the cheap treatments will become available.
In the mean time those would don’t want to wait, those who don’t want to gamble with their health, are still turning to India for generic Hep C treatment.

“Hi Greg
I am Sek from Penang in Malaysia. Yesterday I was diagnosed with Hepatitis C. The money I have to pay to get treated here in Penang is beyond my reach so I would be grateful if you could share information on how to get the medication from India. Who I should contact, where I should buy, the price of Hepatitis C medication in India, how I should buy it… buy the post or do I have to go to India.”

Sek initially contacted me through Facebook and we talked about his options. Because I have been helping people in Malaysia get Hepatitis C treatment for the last couple of years I was able to give him some advice. One good option is simply to fly to India, buy the medication and fly home again, much like I did in 2015. Flights from Malaysia to Chennai are cheap and fast and I have helped quite a few Malaysians with reliable contacts in Chennai.
However it is still an expense that more than doubles the cost of the medication. You have the cost of the air fare and then a few nights accommodation in India.
So for most people in Malaysia it is simpler and cheaper to have the Hepatitis C medication shipped to them. Shipping takes about a week from India to Malaysia.
Because of the prevalence of Hep C genotype> 3 in Malaysia it is important to know the genotype of Hep C one is infected with, or if money is short, to assume that the infection is genotype 3 and treat with generic Epclusa (Sofosbuvir 400 mg + Velpatasvir 100 mg). Because the cost of a genotype test in Malaysia can be above US0 the advantage of assuming the genotype is G3 is that it saves the cost of the genotype test because generic Epclusa will be a highly effective treatment for Hep C genotype 3 whilst also being a highly effective treatment for all other Hep C genotypes.