Sofosbuvir and Sovaldi: A brief History.

Hepatitis C Treatment: A Short History of Sofosbuvir and Sovaldi.

It is now two and a half years since generic Sovaldi was released in India, in May 2015, at a price that was 100th of the cost of Gilead’s branded Sovaldi in the USA.
Here is a brief history of Sofosbuvir and Sovaldi.

Sovaldi is the brand name for Sofosbuvir and the Sovaldi pill contains 400 mg of Sofosbuvir. Sovaldi was approved in the USA in December 2013 and was a breakthrough treatment for Hepatitis C sufferers offering higher cure rates than any other available treatment at that time without the terrible side effects that came with the Interferon based treatments. 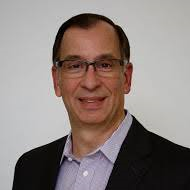 Sofosbuvir was invented in 2007 by, and named after, Michael Sofia, a scientist working for a company called Pharmasset. Sofosbuvir was first tested on humans in 2010 with amazing results and Gilead purchased Pharmasset in 2011.
Gilead did not spend any money researching Sofosbuvir, it purchased a product that was ready to go.

Further testing resulted in Sofosbuvir being approved by the FDA in December 2013 and in the first quarter of 2014 Gilead sold over US$2 Billion worth of Sovaldi. By the end of 2014 sales of Sovaldi had exceeded US$10 billion.
Given that one 12 week treatment of Sovaldi costs less than US$100 to manufacture and it was sold for US$84,000 or almost one thousand times the cost of manufacture, this was a very profitable year for Gilead.

Whilst the huge profits were great news for Gilead and its shareholders the exorbitant price was bad news for most of the more than 100 million people around the world with Hepatitis C because the price put Sovaldi beyond the reach of most people, even in wealthy countries like the USA.
However it was not all smooth sailing for Gilead. The Indian Patents Office did not consider Sofosbuvir sufficiently innovative to be granted a patent and immediately India’s very capable pharmaceutical manufacturers saw a huge opportunity to make generic versions of Sovaldi.
Here Gilead acted fast.
Gilead knew that Sofosbuvir could be made easily and cheaply and it did not want international markets flooded with cheap and effective versions of Sovaldi so it entered into negotiations with the major Indian pharmaceutical companies and in exchange for giving the Indian pharmaceutical companies a license that included all the intellectual property associated with Sofosbuvir the Indians would pay Gilead a royalty on all sales and would agree not to sell into any of Gilead’s major markets, such as the USA and Europe.
This agreement meant that Gilead could keep making huge profits from the wealthier countries and it would still get some income from the poorer countries, which it was not selling into anyway.
In May 2015 the first licensed generic Sofosbuvir became available from India at a retail price that was about 100th the price in the USA and other western countries. 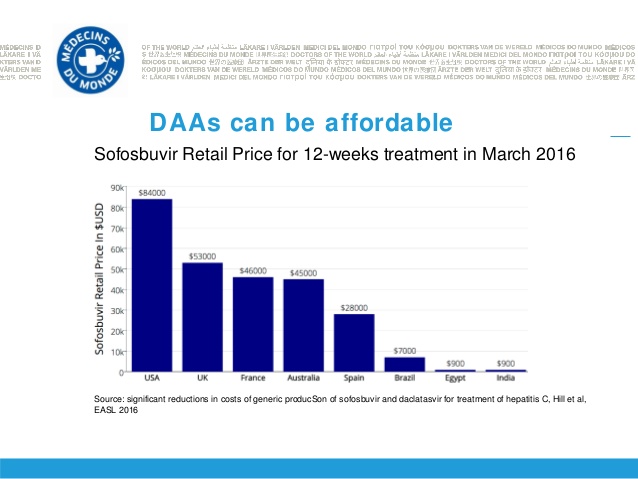 So people from the west began, by various means, to purchase generic Sovaldi. This meant that the India pharmaceutical manufacturers could produce higher volumes of Sofosbuvir, thus bringing the price down and making generic Sovaldi cheaper in Third World countries.
Of course Gilead tried to stop the flow of generics into its Western markets, mostly by fear campaigns, warning of fake, even toxic, generics however this campaign was only partially successful and as more and more people were treated with generic Sovaldi doctor, nurses and people with Hep C all saw the results. The fact was that treating Hepatitis C with generic Sofosbuvir gave exactly the same cure rates but at 100th the price.
The rest, as they say, is history. 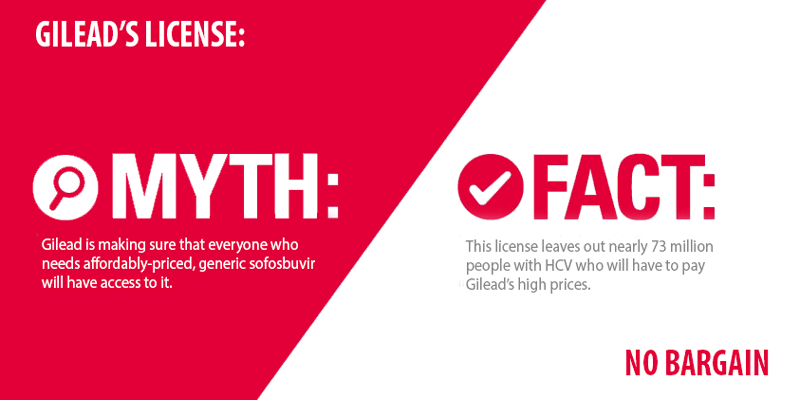