What is the best Hepatitis C Treatment?

What is the best Hepatitis C Treatment?

Now I am not a doctor and have no formal medical training but I have lived and breathed Hepatitis C seven days a week 365 days a year since 2014 when I first learned that I was infected with Hepatitis C.

Whilst I am not a medical man I do, however, have a Bachelor of Arts degree, a Diploma in Education and a Masters Degree in History and I was 6 months into my PhD when I learned I had Hep C. So I am no dummy and I am quite capable of doing serious formal research.

So in this post I am going to show you which is the best, and most affordable, Hepatitis C treatment based on the results of solid scientific research done by many different internationally recognised research groups.

And I am going to say now that the best value all round Hep C treatment is Sofosbuvir 400 mg + Daclatasvir 60. In almost every situation, for every genotype Sofosbuvir + Daclatasvir is equal to, or better than, Epclusa, Maviret or Harvoni and it is also the least expensive at US0 for a 12 weeks treatment.

In 2014 I was six months into my PhD at the University of Tasmania when I suddenly became very, very sick. To cut a long story short I discovered that I had Hepatitis C.

Back in 2014 the only treatment option I could access was Sovaldi, but it was more than $100,000 for a treatment, which I did not have. So in May 2015 I went to India and purchased generic Sovaldi and I treated myself with a combination of Sovaldi (Sofosbuvir 400 mg) + Ribavirin. Three months later I was cured.

With the availability of so many new treatments, and with the drug companies spending vast fortunes on advertising it became hard to decide which Hepatitis C treatment was actually the best.

Below are graphs from various studies that show how the different drug combinations perform against the different Hepatitis C genotypes. Look through them yourself and make up your own mind. I have made a little comment at the bottom of each graph. 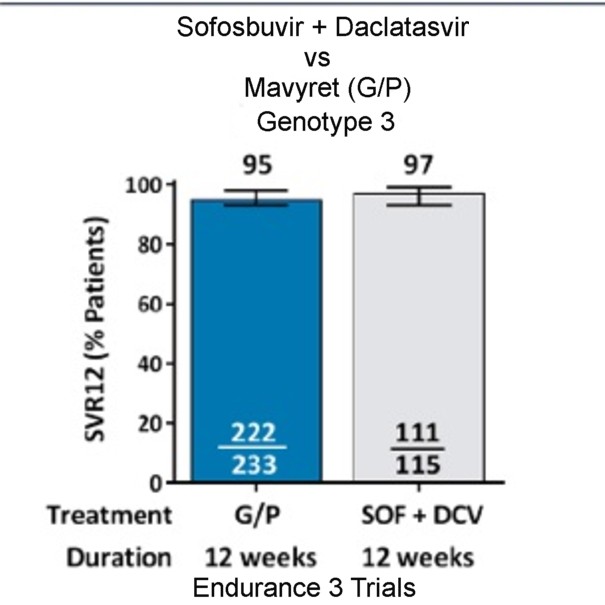 This graph compares Mavyret (G/P) with Sofosbuvir + Daclatasvir for treating Hep C genotype 3. As you see Sof + Dac is superior to Mavyret 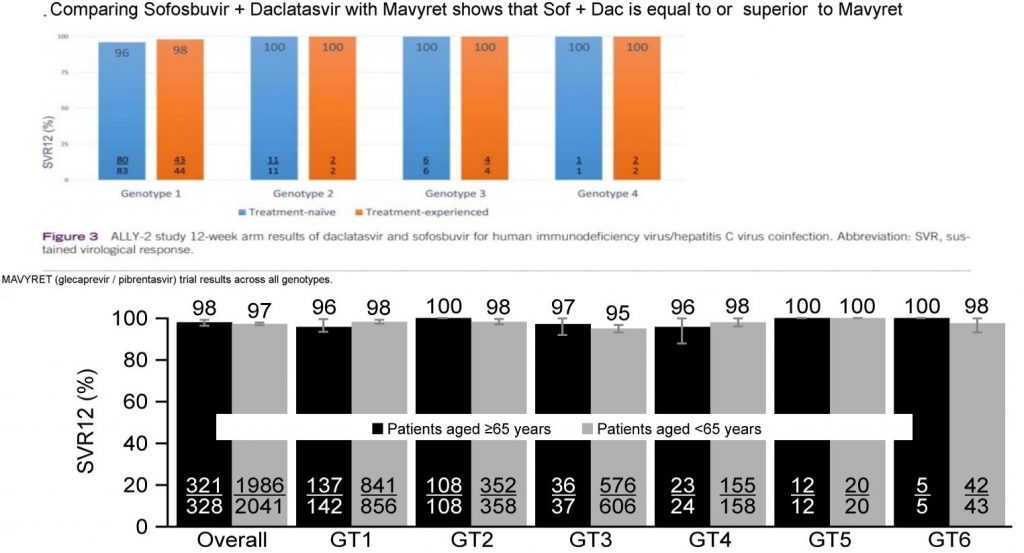 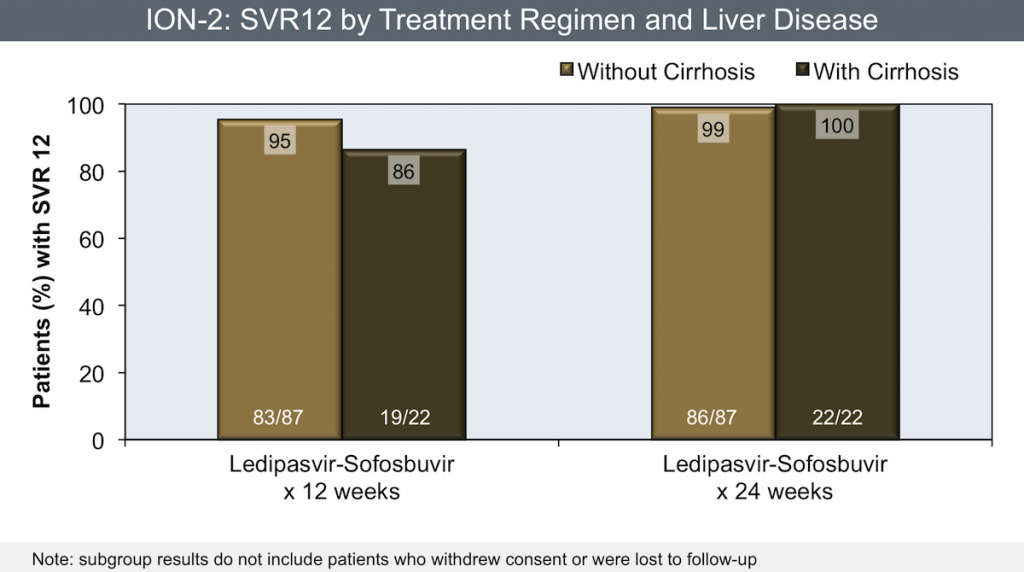 This Graph shows that 12 weeks treatment with Harvoni gives a 95% cure rate for people without cirrhosis. It also demonstrates the fact that “The Longer the Treatment the Higher the Cure Rate”

Epclusa for all genotypes of Hep C. 12 weeks vs 24 weeks. Treatment with and without Ribavirin 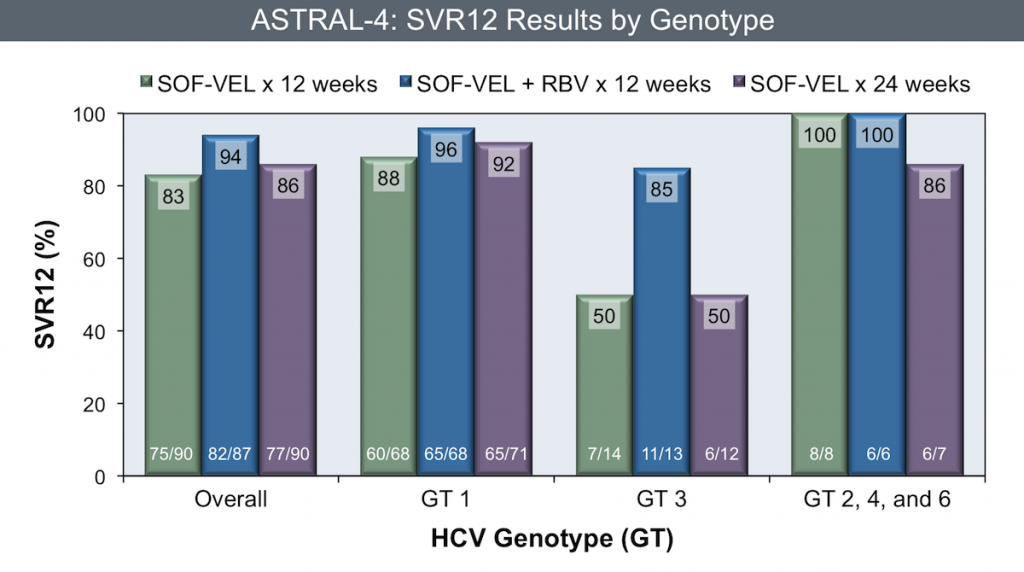 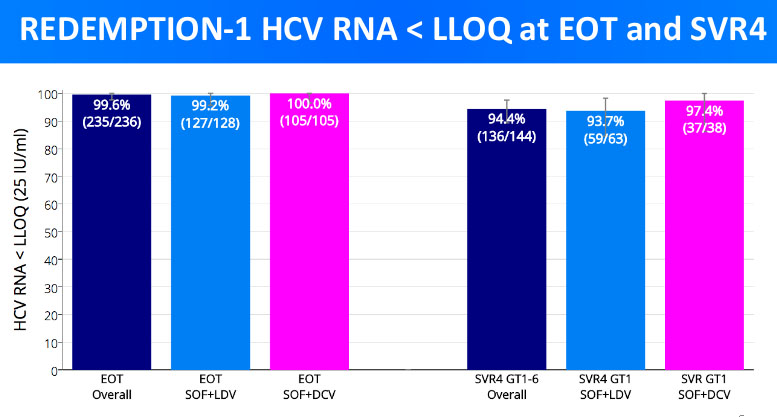 This graph shows that 12 weeks of Sofosbuvir + Daclatasvir gives a cure rate of better than 97% for Genotype 1. Better than Maviret, Epclusa and Harvoni 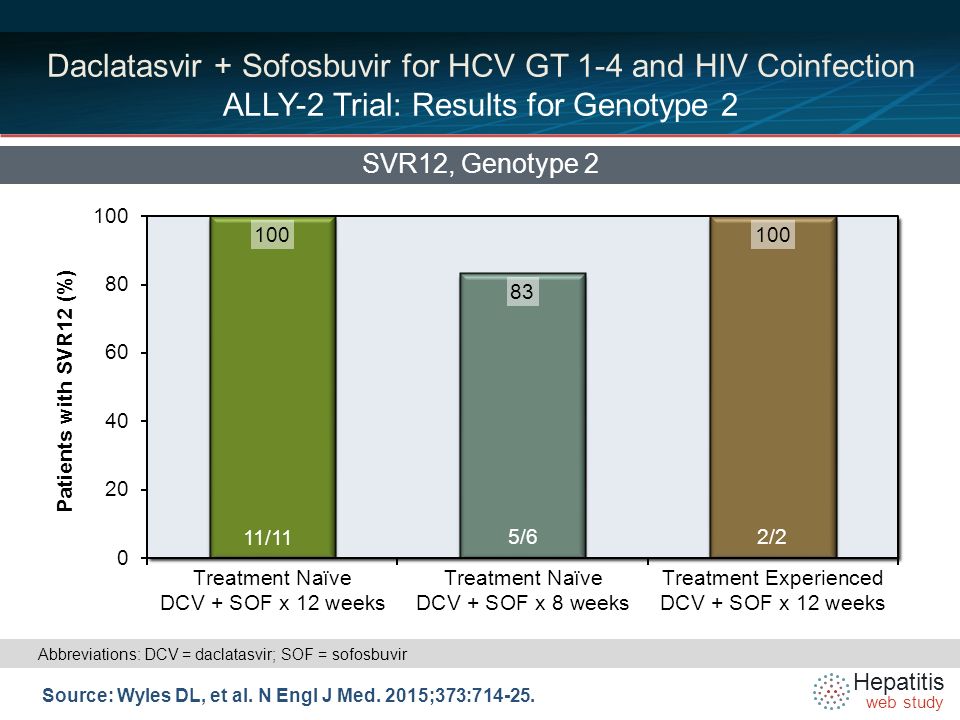 Sofosbuvir + Daclatasvir Hep C Genotype 3: with and without cirrhosis 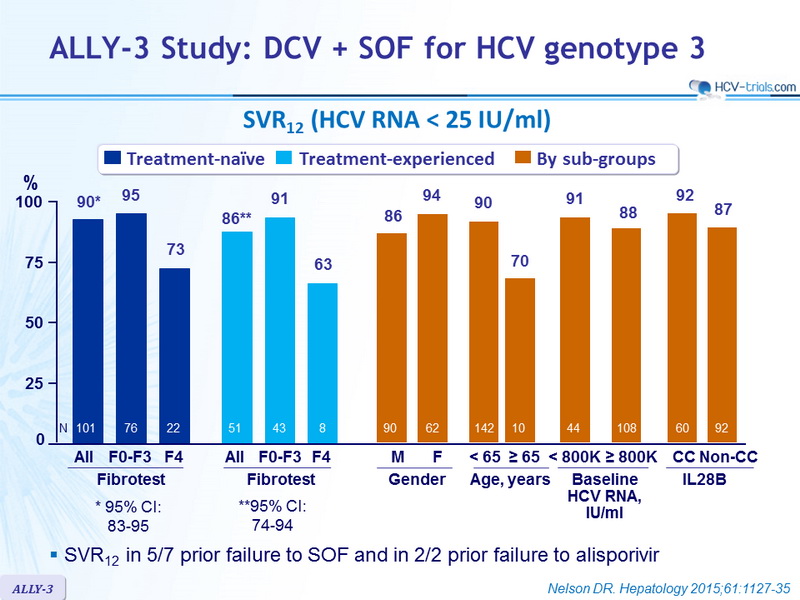 This Graph shows that for people without cirrhosis and who have not failed a previous treatment Sof + Dac gives a 95% cure rate equal to, or better than, Epclusa or Mavyret 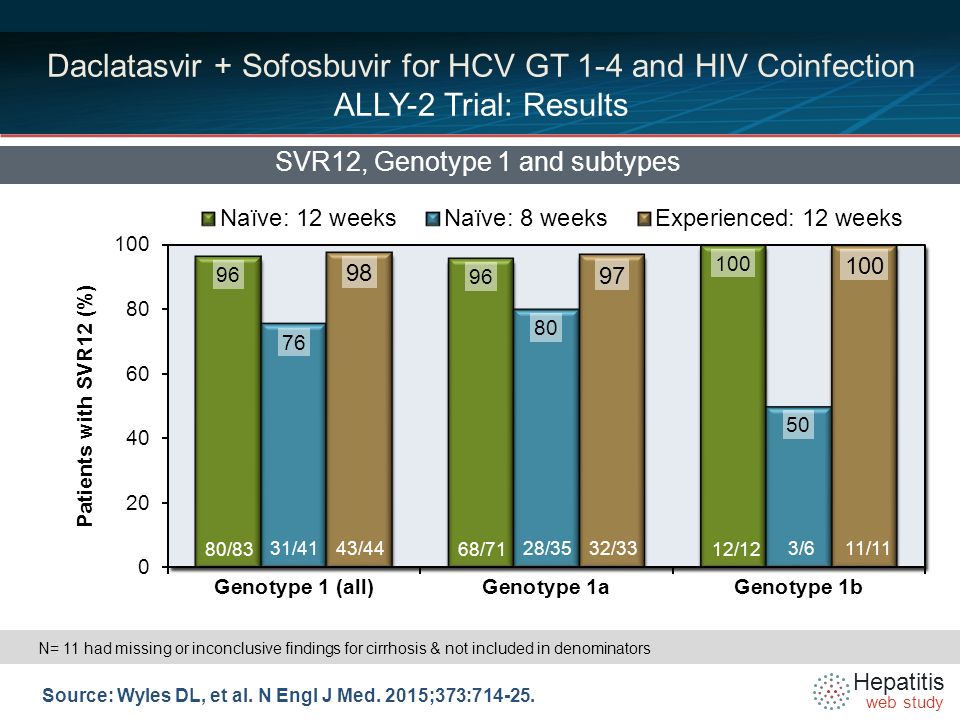 Sofosbuvir + Daclatasvir vs Epclusa  for Hep C genotype 2 and genotype 3. 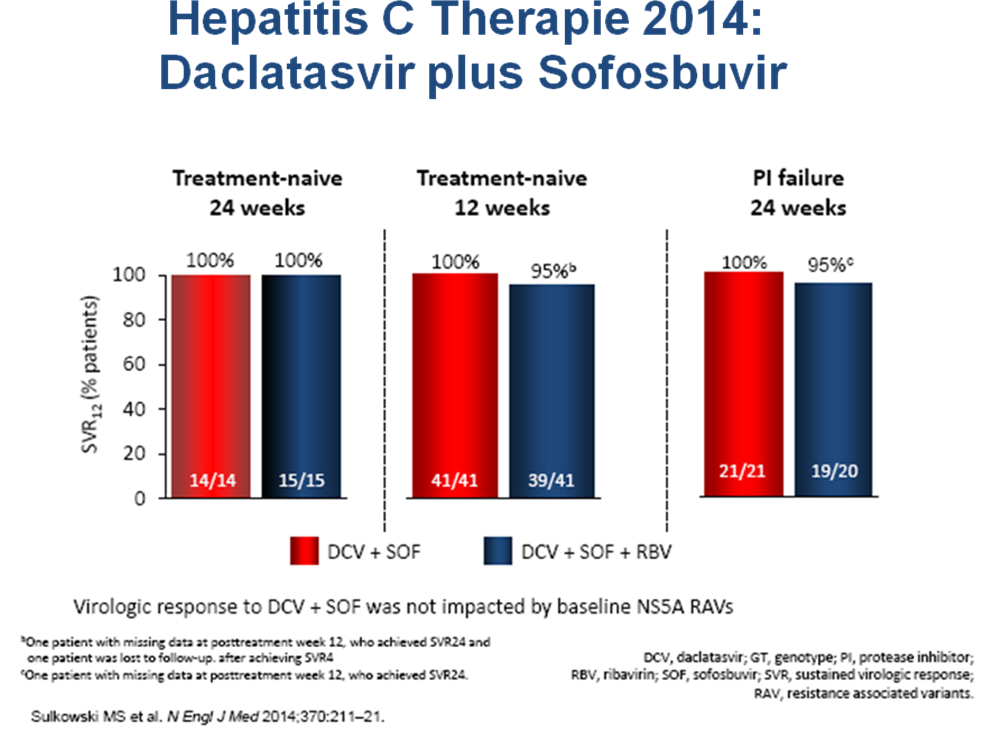 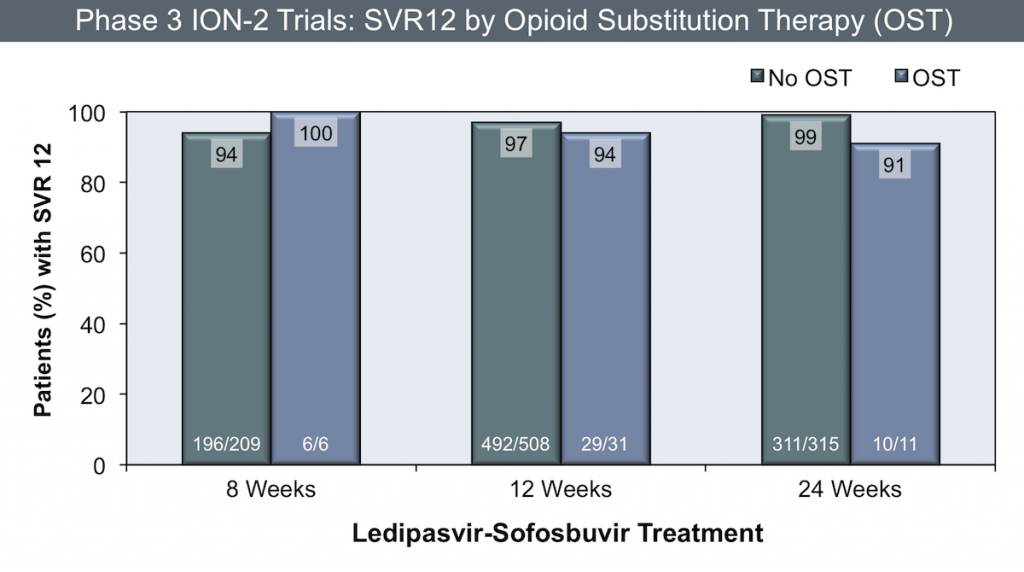