The issue of how much money Big Pharma spends on buying influence in the medical world is an important one.
Big Pharma deliberately focuses its bribery and those corrupting influences on the medical profession. It targets specialist doctors who are leaders in their fields and who can influence their peers.
This post will look at how Big Pharma uses its vast profits to influence medical opinion and practices. I will not even touch the money its uses to corrupt politicians and other organisations.
Because Big Pharma employs the best people to hide their corrupt practices it is impossible to get a clear picture of how much money is spent on a global scale but it is possibole to see what is spent in biggest market for drugs in the world, which, per capita, is the USA.
The reason that we can look into the workings of Big Pharma in the USA is because of a law passed there that has forced Big Pharma to disclose where such influence buying money goes.And when we look at the disclosed figures we see that Big Pharma spends billions of dollars every year buying influence in the US medical world.

(Remembering that this is only what they disclose not what they really spend).

It uses direct “donations” to doctors and research institutions and hospitals. And these donations are not small amounts, often they are in the tens of millions of dollars.
Big Pharma also buys off doctors by paying for them to attend “conferences” paying for the conference fees and for them to fly business class to these “conferences” where they stay for free in 5 star hotels and may or may not actually attend the conference.

(Not forgetting the Big Pharma also sponsors the conferences!!!)

Here is an interesting diagram that shows just how much money Big Pharma throws at buying influence and favour in the medical world in the USA.

The diagram below and the data it contains is the work of Rebecca Hill a U.S. based researcher. 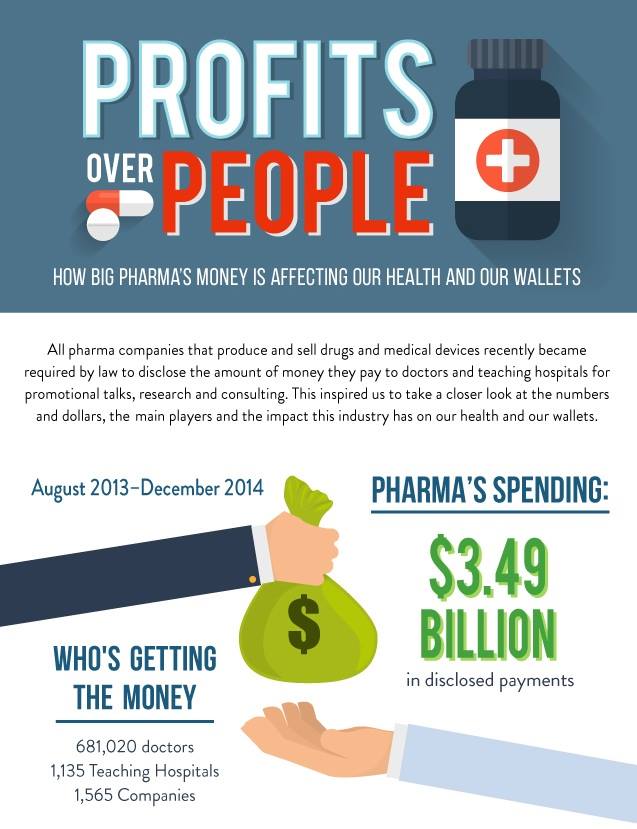 Every day I get emails from people with Hepatitis C whose doctors refuse to monitor them during their treatment with generic Hep C meds like Harvoni.
Likewise doctors regularly refuse to write prescriptions for patients wanting to start generic treatment.
This happens all around the world but it is particularly an issue in the USA.

One of the reasons for this is that the doctors are scared of Big Pharma, the other reason is that they do not want to risk the fat pickings that Big Pharma offers them. Big Pharma gives doctors all kinds of free things from pens and note pads to trips overseas and BIG lumps of money.

Knowing just how generous Big Pharma is to those who do as they are told many doctors will not risk offending the powerful and ruthless rulers of Big Pharma.

The piece below was written by journalist Martha Rosenberg, it shows in great detail how Big Pharma has corrupted the medical world in the USA and these same practices are employed in all countries across the globe.

“Many doctors make a huge amount of money from Pharma by giving speeches promoting its drugs. The speech-givers, who sit on Pharma’s speakers’ bureaus, are considered “key opinion leaders,” capable of convincing other doctors of a drug’s benefits so they will then prescribe the drug.

Big Pharma also pays doctors to conduct studies of its drugs often paying them for each subject they recruit and winning their loyalty because they are then familiar with the drug after monitoring subjects on it. A huge Pfizer trial of the drug Neurontin was conducted just this way charged Carl Elliot in the New York Times: 772 study investigators were recruited so they would personally prescribe the drug once they were familiar with it. The study was not conducted to establish effectiveness and safety and the joke was on them—and the public.

Traditionally in the USA , Big Pharma also paid for Continuing Medical Education courses, or CME, that are required for doctors to keep their state licenses and sometimes their insurance. Since the Pharma subsidized CMEs were “free,” doctors saved money they would have spent to enroll in a real course but of course had to listen to a Pharma sales pitch as a captive audience, instead.