Today I received a lovely email from a woman in Estonia who contracted Hepatitis C after getting a blood transfusion some years ago. People with Hepatitis C in Estonia face the same problems as people in most EU countries, access to treatment is triaged and they must wait until their liver fibrosis levels reach F2 or more. As this Estonian woman is only in her late 20’s she would probably have to wait many years.
No-one wants to live knowing that they are carrying a potentially fatal disease, particularly if they are married and want to have children, as was the case with this Estonian woman. She wanted to have kids and also was always worried about transmitting the Hepatitis C virus to her husband… even though the chances of doing this were very, very small.
So she contacted me a number of months ago and told me the story of how she caught Hepatitis C and how desperate she was to be rid of the disease. So I organised for generic Hep C medicines to be sent to her in Estonia.
Below is the email containing the story of her good news and her relief at being completely Hep C free!

Dear Greg,
I wanted to share the good news with You! I have completed my 3 month treatment with Harvoni and my last blood test showed I have no Hep. C virus left in my blood!!! For comparison I sent my 3 blood tests to you with viral load results.
1. First one – when I was first diagnosed with Hep. C on 12th of June 2017 – the amount of the Hep C virus in my blood was then – 794563.
2. Second test during my treatment – 30th of August 2017 – the amount of the virus in my blood was only 22! I had been taken the generic Harvoni only for a month.
3. After the treatment (3 months of taking Harvoni) – 31st of October 2017 –

From the tests You can see the date and the amount of the virus and it is unbelievable that the treatment works so fast! And so quickly! I feel like I have my life back. I have not been ill with the flu not even once during the treatment or after – before I was ill all the time.

And I have energy again!

I am not tired all the time. I sleep and when I wake up I am not tired. Before even after sleeping I was tired.

The biggest change I can see is that before I knew I had Hep. C. – I began noticing how my tolerance for alcohol somehow became lesser and lesser. Somehow one glass of wine – became too much for me. Which I thought was really weird because during my university years I was able to tolerate alcohol well. I told this to my doctor 2 years before being discovered I had Hep. C – but doctor thought it was irrelevant. So all in all – the first signs I actually started having was – the liver tolerance to alcohol became zero. Why do doctors not take this seriously??? Why was I not given liver tests back then??? Why do doctors think changes in liver are not important??? I could have been diagnosed years before – but people are not taken seriously. More over – Hep. C tests are not given to people who possibly COULD have it.

As I got Hep. C from an operation from a hospital – I think everyone should be tested for it order to actually prevent this kind of a thing! As I said – I have never used drugs or needles, my husband has been my only sexual partner – he does not have Hep. C and I have had 6 operation in different hospitals in Estonia. Which makes it quite easy to guess where and how I got it. Doctors seem to believe that Hep. C is something that needs only to be tested when someone is an addict – there have been many cases in the USA where Hep. C has been transmitted in hospitals during operations.

Thank You so much for just putting Your story out there and giving people HOPE! I think it is a shame that there is a treatment but it is not offered or even given to people who are sick and ill because the government thinks only those who are on the verge of actually dying of liver failure deserve to be treated! Such blindness and complete lack of interest for actually curing people and preventing unnecessary pain and agony of Hep. C patients.

But luckily we have YOU! Keep on fighting – you have triumphed by saving the lives of thousands of people! I thank You again for helping me get the treatment I was not given for my Hepatitis C in Estonia because I was not ill enough. TRULY THANK YOU!!! 🙂 You have changed my life forever!

I am beyond grateful, 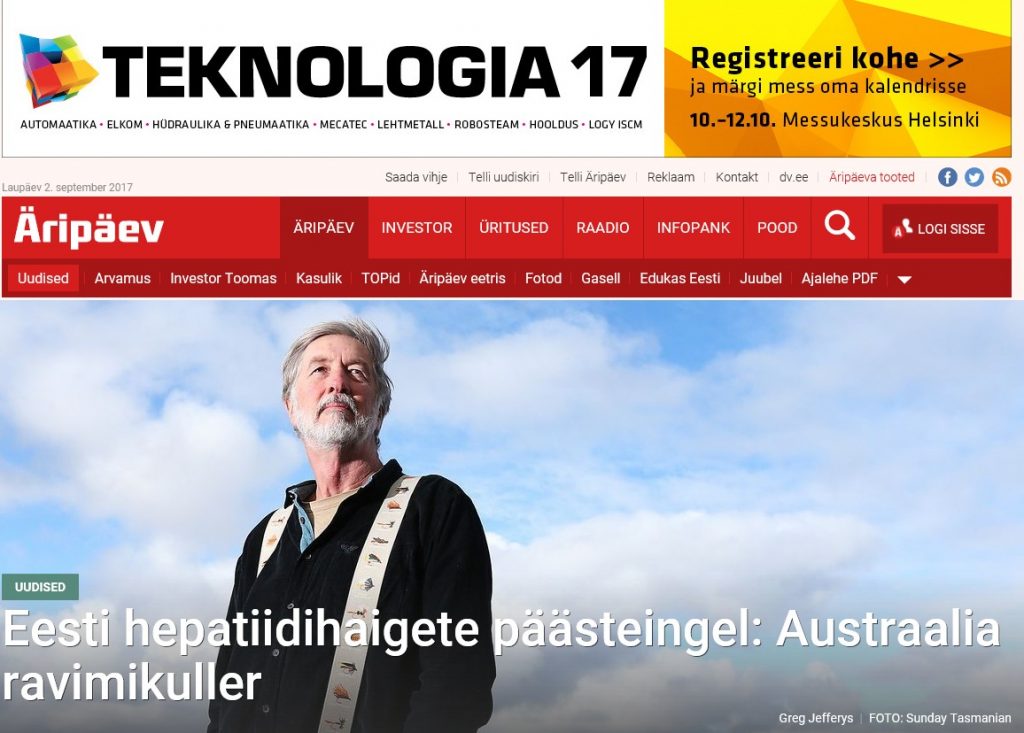 The strange situation in the world today; that a person living in Tasmania can be helping people in Estonia get treatment for their Hepatitis C