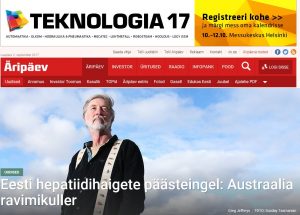 Getting Medicine for Hepatitis C in Estonia

Hepatitis C is a viral pandemic; like COVID 19 Hepatitis C is found in every country on the planet. Since the year 2000 more than 15 million people have died from their Hepatitis C infection.

Globally, somewhere around 100 million people are infected with Hepatitis C.

Unlike COVID 19 the mainstream gives almost no coverage to the Hepatitis C pandemic.

For example in Estonia, which is certainly not a Third World country, people theoretically have free access to Hepatitis C treatment through Estonia’s national health service, however, because Estonia is not a rich country the access to the very expensive brand versions of Hep C medication is triaged, this means that a person must have significant liver damage before they can access treatment through Estonia’s national health service.

For this reason, I am occasionally contacted by people from Estonia to organize the supply of Hep C medication to Estonia. Fortunately, Estonia allows its citizens to import generic Hep C medication for personal use, so the process is quite simple.

The problem is that the mainstream media in Estonia does not give any coverage to the Hepatitis C pandemic, meaning that most Estonians with Hepatitis C do not know that they can easily access cheap generic Hep C medication from India.

Below is a conversation thread I had with a guy from Estonia. He was a little short of money when he contacted me so I supplied the medication at a low price and asked that in return he would write his story for me.

Here is his story.

I know you don’t remember all people you have helped. Just wanted to let you know I got rid of my hepatit C.  A blood test two months after treatment shows that I am free of the disease. And as we agreed I will give you my testimonial in Estonian, please put it in the right place. ( the Estonian language testimony is at the bottom of this page)

I will give short answers to your question as a true Estonian.

Don’t know exactly when I contracted Hepatitis C. I knew I drank too much and had some health issues because of my drinking.

Drinking made me to feel very sick, even though I loved to drink beer. To be sure I was so sick that I had started to decrease volumes of beer against my will.

Then I had some blood tests that showed liver problems, made my way from doctor to doctor and ended up on infectionist. She said I have Hepatit C and sent me to a liver test that revealed I was infected with Hepatitis C.

In Estonia f your liver is not good enough anymore then you can get treated by a national health insurance fund and all is good. In my case, the liver was in too good condition, even though I was feeling really sick. So there are 3 options for people in this situation in Estonia.

One – wait till your liver is damaged enough to access the treatment.

Two- buy medicines by yourself, maybe I’m wrong but when I talked to the doctor and the pharmacist they talked about the Hep C medication costing around 5000 – 6000 €. I do remember that I asked, “Do I have to be in the hospital for 2 months?” they said – no, it’s just for medicines.

Of course, the third option is to write to you.

I would also like to explain that there is a social stigma attached to having Hep C in Estonia. When I told my mom I had Hepatit C  her reaction was that she said to me, “Hepatitis C is the disease of sailors and sluts!”

But as I said we are not a very socialized nation. It is simply important for us to do and feel better than our neighbors. So I made my neighbors happy and felt great about it.

All the best and take a beer

Dear Estonian, if you have reached this page, you will probably be in a situation where even I was – it means that the state health insurance system will not help you and you will try to find medicines on your own. I also know the hesitations that prevail that it may not be so easy, but it is. Just like you read on this page, this is how it works. You contact Greg, agree on which drugs might be right for you, pay money and get the drugs.

I was also in contact with my doctor when ordering medicines, I asked for advice on which of the two options Greg would recommend, reviewed the medicines, read the leaflet, approved, had blood tests done before and immediately after the tablet regimen, and additional tests 2 months later. In my case, these drugs worked. Hepatitis C is gone. I have no idea how such self-improvement is reflected in my digital story.

And Greg, if you now try to make this letter understandable with the translation program, thank you for the effort you make for the people. When an Estonian thanks, he thinks so, we talk a little and rarely thank people.