The Cost of Hep C Treatment in the Philippines

The Cost of Hepatitis C Treatment in the Philippines

The cost of Hepatitis C treatment in the Philipines is relatively cheap by Western standards because generic Hep C medicines are available from Pharmacies in the Philippines, with a doctor’s prescription.
For example a 12 weeks treatment with Sofosbuvir + Daclatasvir will cost between US$700 and US$900 depending on where you buy it from.

The Real Price Of Hep C Meds in the Philippines 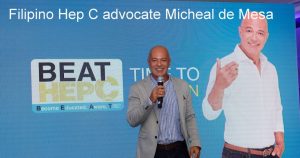 Mylan is a US pharmaceutical giant that makes a large lump of its vast profits out of making generic medication. Mylan has factories in India and makes generic medication there, including generic Hep C drugs, which are sold throughout Asia and the rest of the world.
Last year Mylan reached an agreement with the Philippines government to sell its generic Hep C medicines there. Interestingly they used one of the Philippines ‘ most famous movie stars, Michael de Mesa, to promote the arrival of generic Mylan Hep C meds.
Michael is an exceptional Filipino because he is one of the few celebrities to go public about his Hep C infection and subsequent cure. Michael has been a great Hep C advocate in the Philippines.
My own relationship with Michael de Mesa is that I supplied him with generic Hep C medicine from India back in 2016.
Michael was fortunate in that he had good medical support and an informed doctor and could also easily afford the price of the generic Hepatitis C medicine that I organized for him.
However, the majority of Filipinos with Hepatitis C are not so fortunate. Even the price of Mylan’s generic Hep C treatment is very high for Filipinos with Hep C.  Most will struggle to find enough money to be able to afford the basic Hepatitis C tests like a viral load test or a genotype test. Finding the money to buy Mylan’s generic Harvoni or generic Sofosbuvir plus Daclatasvir will most often involve going into debt with local money lenders.

It is for the above reason that I began my program of supplying low-priced Hepatitis C medicine in the Philippines. Whilst buying generic Hep C treatment from a pharmacist in the Philippines will cost about US$800 (around 39,000 pesos) I will supply the same treatment for 15,000 pesos (around US$300) including the shipping.

How can I supply Hepatitis C treatment so cheaply in the Philippines?

The reason is very simple, I put people before profits. Because of the economic situation in the Philippines, I am happy to supply Hepatitis C medication at my cost price.

Yet despite this very few Filipinos are aware that they can buy the Hep C medicines at such, relatively low prices. The reason for this is that the news media does not ever cover this subject matter. Whilst Mylan is able to spend a small fortune promoting the launch of its generic Hep C treatments I must rely of news being spread by word of mouth because the news media in the Philippines will not cover the important issue of the cost of Hep C treatment and the devastating effects that untreated Hep C has on Filipinos and the Philippines economy.

Recently I sent press releases to various Philippines news media groups and prominent journalists. I did not get even one response.

And so it is that situations arise where doctors tell their patients not to use generic Hep C meds imported from India but to buy the local Mylan product, even though it is made in India and almost triple the price.

Below is a conversation thread I had with a Filipino whose mother needed Hep C treatment. Even though he wanted to get her medication through my Hep C Buyers’ Club his mother’s doctor persuaded her not to allow it. Instead, they had to use their savings to buy exactly the same product for triple the price from their local pharmacy.

You sent Today at 2:00 PM
Could you please tell me what you paid for the Sofosbuvir + Daclatasvir?
Tony sent Today at 3:59 PM
800$ u.s dollar = 39,000 pesos for 3 months of Hep C treatment here in Philippines
I said to the doctor that i want to purchase from you cuz the cost 50% much cheaper.
You sent Today at 4:00 PM
Why didn’t you get it from me? Its only 15,000 pesos for exactly the same?
Tony sent Today at 4:03 PM
I told the dr. That can i buy the Hep C medicine from india? Cuz someone in the hep c community will help us and it cost cheaper. The doctor reply no! Just buy it locally.

I don’t have the credentials to convince her. So sad.
Tony sent Today at 4:09 PM
You help many Filipinos. Thank you so much for that sir.